An important query related to the transitional provisions under GST is regarding the treatment of VAT and CENVAT credit, in respect of stock held on 30 June 2017. The treatment will depend on the nature of registration of the organization under the present laws.

Every registered person is entitled to take credit of input tax if, within 90 days of the appointed day, he submits a declaration electronically in FORM GST TRAN- 1, duly signed, on the Common Portal specifying therein, separately, the amount of input tax credit to which he is entitled.

The Commissioner may extend the period of ninety days by a further period not exceeding ninety days, on recommendations of the Council.

When ITC claimed by registered person in return filed under existing law before appointed date:

Balance not allowed to be carried forward in the following cases:

When ITC not claimed by registered person in return filed under existing law before appointed date:

If  ITC has not been claimed in the return, say in case of capital goods up to 50 % credit can be claimed in first year, but the same is also admissible under GST regime only then it would be allowed to claim credit under GST. If it is not admissible under GST then, credit shall be carried forward under GST and there will be no requirement to file detail in respect to stock in form GST FORM TRAN – 1.

Credit of eligible duties in respect of inputs held in stock and inputs contained in semi-finished or finished goods held in stock on the appointed day:

A registered person, who was not liable to be registered under the existing law, or who was engaged in the manufacturing of exempted goods or provision of exempted services, or who was providing works contract service and was availing of the benefit of notification no. 26/2012— Service Tax, or a first stage dealer or a second stage dealer or a registered importer or a depot of a manufacturer, shall be entitled to take, in his electronic credit ledger, credit of eligible duties in respect of inputs held in stock and inputs contained in semi-finished or finished goods held in stock on the appointed day subject to the following conditions:

In case of unregistered person, who was not in possession of an invoice or any other document evidencing payment of such duty, shall be allowed to avail ITC on goods held in stock on appointed date at the rate 60% on goods, which attract central tax @ 9% or more and 40% for others. Subject to following conditions:

Credit in case supplier supplies both taxable as well as exempted goods/services:

ITC claimed in return for taxable supply, will be allowed as ITC under GST regime also. Same treatment as discussed in the previous paragraph will apply for ITC in respect of inputs related to exempted goods/services.

Availability of ITC under GST when payment for input/service has been made before the appointed date but input /service is received after appointed date:

A registered person shall be entitled to take, in his electronic credit ledger, credit of eligible duties and taxes in respect of inputs or input services received on or after the appointed day but the duty or tax in respect of which has been paid by the supplier under the existing law, subject to the condition that:

The invoice or any other duty or tax paying document of the same was recorded in the books of account of such person within a period of 30 days from the appointed day and statement is filed in respect of such credit. 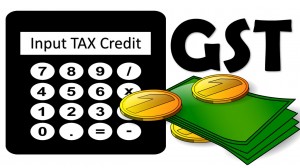 Treatment of credit on goods held on stock as on appointed date in case of person paying tax at fixed rate or amount under existing tax regime:

A registered person, who was either paying tax at a fixed rate or paying a fixed amount in lieu of the tax payable under the existing law shall be entitled to take, in his electronic credit ledger, credit of eligible duties in respect of inputs held in stock and inputs contained in semi-finished or finished goods held in stock on the appointed day, subject to the following conditions:

The input tax credit on account of any services received prior to the appointed day by an Input Service Distributor shall be eligible for distribution as credit under this Act even if the invoices relating to such services are received on or after the appointed day.

Transfer of unutilized CENVAT credit by a taxable person having centralized registration
under the earlier law:

CENVAT Credit carried forward in the last return filed under the earlier law can be availed subject to following conditions:

Such credit may be transferred to any of the registered persons having the same Permanent Account Number for which the centralized registration was obtained under the existing law.